Anticipated salary still seems to be a bit of an enigma for nonprofit executives. Debates rage within the sector on how much is too much and how much is too little. At one point is a nonprofit paying too much to top executives and too little to their staff and program budgets? Or at one point is a nonprofit not paying enough to be competitive and equitable for the amount of high decision-level work asked of nonprofit leadership?

When it comes to nonprofit salaries, there are several factors at play. Not only are nonprofit leaders competing with Overhead Myth issues (for more information on what this means and its impact on nonprofits check out this article from the National Council of Nonprofits), they also most likely have internalized sacrificing pay for their nonprofit’s mission. There are still major intersectional pay gaps between different types of leaders.

Different funding structures and sources have different consequences for staff salaries and overall organizational sustainability. Each organization is structured differently, exists in different geographical regions and in different political or socioeconomic structures. Even the size of the nonprofit and the type of mission it exists to serve can make a difference for the expected salary. For example, if a nonprofit focused on medical services requires a thorough understanding of certain medical professionals’ needs, they might have to pay the high-level pay associated with that medical profession. A Nonprofit Executive needs to understand the different forces influencing potential salaries so they can navigate the healthiest pay for themself and their organization.

Ultimately, the nonprofit’s board of directors and varying state laws are the main deciding factors in a nonprofit’s executive-level salaries. Past that point, there are different determining factors to what that salary might look like.

Guidestar by Candid does conduct a Nonprofit compensation report; however, it does cost a bit of money. The 2019 Guidestar Nonprofit Compensation Report’s website touts a single user report fee of $399 and a multi-user report fee of $999. Many consulting groups will also conduct a wage/salary analysis for nonprofits for a fee if one is looking for specific parameters to examine. While these options might give a comprehensive look at the current compensation landscape, there are cheaper, mostly free options for nonprofit leaders looking just specifically to their executive salary.

For some determining salary at that executive level, they might want to refer to current average salary amounts and some sites list averages from self-reported salaries. PayScalecurrently shows the average salary – again from self-reporting – for “Executive Director, Nonprofit Organization” at $66,226. This is decently low for any executive position and part of the reason is that the average also includes several part-time nonprofit executive positions where the only paid position for the organization is a part-time executive. The page lists some of the organizations and their pay along with some demographic information and differences toward the bottom of the article. This same article has a calculator one can use to determine a rough estimate of what a nonprofit executive director should make based on location and years in the field. Most job listing sites, such as Glassdoor and Ziprecruiter, will also list out averages.

Basing the Salary off the Nonprofit’s Budget

One popular way to determine an Executive’s salary is by offering X% of the nonprofit’s budget. Chron released an article in 2018 on why this would be a good option and how it would work. The main thought process behind basing the salary off a certain percentage of the full budget is two-fold. One, this is the amount of money this leader will manage and be ultimately responsible for. And two, this salary helps to set a benchmark for this leader’s performance. If a nonprofit executive is asked to manage millions and bring in millions by way of major gifts or fundraising campaigns, then the ethical salary would be a six-figure salary. By tying the Executive’s salary directly to the budget, a nonprofit is more likely to all in line with certain state laws on compensation and better incentivize their leader to grow the nonprofit.

Another popular approach tied to the budget is to create and use an organization-wide pay scale system. This really looks at the numbers from a big picture perspective. Realistically, how much can an executive afford to pay the entire staff? What is the total staffing budget? Then, start looking bottom-up. Can the starting salary of the least paid staff member afford to live a healthy life with just their salary alone with that region’s cost of living? Then the next tier should be X% higher than that due to X% increase in role and decision making. And so on and so forth.

Why the Nonprofit Executive’s Salary Matters

An insane executive salary only makes sense if the organization and service output on a whole is healthy enough to match it. If an executive is making more than a certain percentage of the entire organization’s expense budget, there is a problem. This problem extends to that organization’s future ability to raise funds via donors. Donors, especially higher figure, corporate, and institutional donors, still pay attention to Nonprofit G&A percentages – of which salary is a reportable portion. Pair that with the ability for some salaries to be publicly known, and a lopsided top-end salary could deter donors from choosing that organization as a recipient of their charitable contributions.

That shouldn’t be a deterrence from making sure that the Executive’s salary is fair for the work required. At the end of the day, a nonprofit executive deals with an overwhelming amount of issues in their day to day. The grueling and oftentimes emotional complexities of the work required to lead a nonprofit organization can really wear a person down. Therefore, nonprofit leaders need to ensure they are being paid enough to offset and 40+ hours a week of work to protect against burnout. Burnout and stress at the top tend to trickle itself down into the rest of the organization.

So how much should a nonprofit executive expect to make? It honestly really does depend. The best advice is to gather as much information needed to be able to fully understand the numbers associated with the pay for that nonprofit in that geographical region. If one needs more information on the general nonprofit compensation landscape, Grantspace by Candid has a short article listing a few resources. An initial look at the financials and 990’s for the organization can also be telling. If a nonprofit only brings in so much after paying for their programs and services, then they realistically only have so much to give to salaries. And finally, determine the amount of growth expected from that organization and the amount of work required to reach that growth.

In order to provide the highest quality services and work toward a nonprofit’s mission, a nonprofit needs to hit certain metrics. Hiring and paying for nonprofit leaders to healthily hit those metrics is vital for any nonprofit organization.

A Beneficial Trend Going Into 2020 for Nonprofits – Networking Platforms 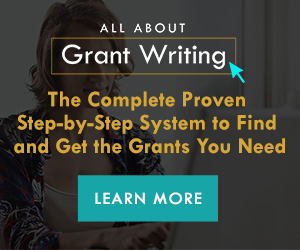 How to be 100% Ready to Apply for Grant Funding

Grants Market Me Consulting - May 15, 2020 0
There has never been a greater need to diversify your nonprofit’s fundraising strategy than right now